Back at the Barnyard: Slop Bucket Games 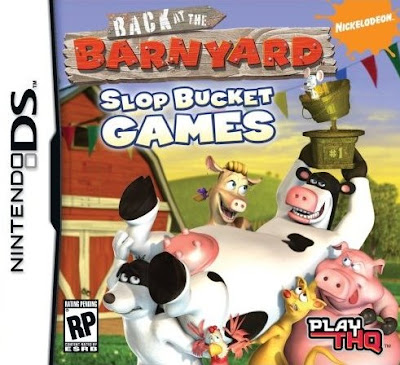 Perfect for making a long car ride pass quickly, this collection of 10 games is based on the Nickelodeon movie/TV series, which is full of wacky talking animals.

You can play either in story mode, where you move around a map to discover and unlock the games, or in "Quick Event" mode, letting you jump directly to one of the games, providing you've unlocked it already in the story mode. We tried three of the games, and found them to be well designed, taking full advantage of the DS touch screen. For example, Chicken Launch gives you a catapult and a set of moving targets, and Stickbike Stunts is a clever racing game inspired by the online game, LineRider. In the story mode, you try to win the Slop Bucket trophy. Or, if you like, you can roam freely around the Barnyard and chat with the other Barnyard buddies. Some reading is required. Borrow it or buy it. Created by Firemint for THQ, Inc.

Link to buy Back at the Barnyard: Slop Bucket Games
Posted by northridgemom at Sunday, August 02, 2009 No comments: 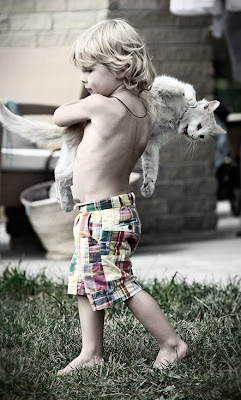 Posted by northridgemom at Saturday, August 01, 2009 No comments:

In terms of graphics and sounds, this 10th edition of Backyard Baseball isn't the bestlooking, but it does deliver an excellent two-player baseball experience. The 2010 edition features new fields and an updated player roster with kid versions of players from all 30 MLB teams. These include David "Big Papi" Ortiz, Ken Griffey Jr., Vladimir Guerrero, and Albert Pujols. A new pitching camera perspective puts the camera behind the batter when hitting and behind the pitcher when pitching. In addition, the Wii version lets you swing the Wii Remote, both to pitch and hit.

Our tester (Daniel - age 9) has played most of the Backyard Baseball games, and this one tops them all. He liked that there are more fields and players in this version, and especially liked playing the Home Run Derby. By playing games in season mode, he was able to unlock Alex Rodriguez, one of his favorite MLB players. At $30 for a Wii game, this is a great value.

Link to buy Backyard Baseball 2010
Posted by northridgemom at Thursday, April 02, 2009 No comments:

Looking for a well-designed first game experience for a preschooler? This is an excellent choice.

In Dora the Explorer: Dora Saves the Snow Princess, players join Dora, Boots and Pirate Piggy as they help the Snow Fairy save the Snow Princess and the Magical Snowy Forest while defeating the Mean Witch. The game features 12 minigames that can be unlocked; all are easy to play and master. In the console edition, adults can pick up the second controller to help, or just play along, creating an excellent social opportunity. In the Wii version, players hold the Wii Remote like a pair of handlebars, leaning left or right to move through the side-scrolling levels. Along the way, they climb, dig, build snowmen, paddle a canoe, steer a dogsled and ride a Pegasus using various motions. You can also ice skate, snowboard and ski while trying to find the magic crystal. In the DS version, you can shout into the microphone to make the sea snake go away, blow into it to help the Snow Fairy fly across the moat, tap with the stylus to steer Paj's dogsled, and use the stylus to drag ice blocks to light up the ice cave.

Both the Wii version and the PS2 version are well-designed, although the game play is very different. Testers found the DS version to be more limited in content, resulting in a slightly lower rating (4.5 stars), compared to the Wii and PS2 versions (4.6 stars).

Diner Dash: Flo on the Go 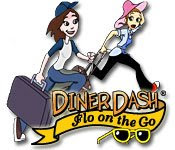 Warning, this game is addicting, so consider yourself warned. Anyone who's ever waited tables knows that it requires juggling a variety of tasks at once. In this game, you assume the role of a fast-footed waitress named Flo. As customers line up at the front door, you must seat them, take their orders, turn them into the kitchen, deliver the food, take the bills, bus the tables and seat the next customers. The better you do, the bigger your tips. Customer satisfaction is measured by a set of hearts; if a customer waits too long, they will leave and your score goes down.

There's been a variety of Diner Dash games in the past (the original idea comes from GameLab). This edition combines casual gaming with a story where Flo is going on a vacation, but loses her suitcase. She has to use her waitress skills to get her vacation and wardrobe back on track. The game features 50 levels and includes blackout and turbulence modes that make waiting tables more difficult, as well as nine types of customers -- including tacky tourists and lovebirds. For $20, you can't go wrong with this fun game, and it definitely stretches your short-term memory. Created by PlayFirst for Bright Minds Media.

Link to download Diner Dash: Flo on the Go
Posted by northridgemom at Sunday, May 04, 2008 No comments: 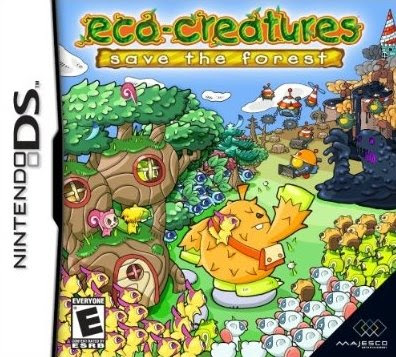 Confusing and hard to learn, this one-player DS game attempts to teach players about the effects that over-industrialization, deforestation, pollution, extinction and global warming have on the environment. While these are big topics, it is hard to figure out what they have to do with this game. Players use the Touch Screen to move a tribe of woodland creatures around an island. Each creature-type has different abilities (Ecolis grow trees, Ecoby build bridges and swim, and Ecomon move objects and fly, and so on). There are 40 missions, but we couldn't get through the first, and our testers all gave up as well. So this really could be a good game, but we'd never know. Other features include a two-tofour player game-sharing mode, and a make your own island feature. Developed by Lightweight Co. Ltd., and Headlock Corporation for Majesco.

Link to buy Eco-Creatures
Posted by northridgemom at Saturday, April 05, 2008 No comments:

Full of slapstick Spongebob humor, this scavenger hunt adventure game lets you explore the lost city of Atlantis in search of new outfits and accessories. As you explore, you switch between SpongeBob, Patrick, Sandy, Squidward, Mr. Krabs, and Plankton to take advantage of each character's unique abilities. Each level features unlockable objectives including: Invading Atlantis in the mighty Super-Scooper Tank; getting cultured by creating high art with Squidward; and singing on the magic bus to Atlantis. Additional content includes unlockable bonus features including multiplayer mini-games in the Amoeba Arcade, and customization of SpongeBob with outfits and accessories. Features and prices vary by platform, from $20 for the GBA to $50 for the Wii.

northridgemom
Grew up in Iowa. Graduated college in Ohio. Received Masters in Arizona. Worked and met Daddio in Manhattan. Birthed Teacup in Brooklyn in 2001. Birthed Scooter also in Brooklyn in 2003. Reside currently in Southern California. Refer to current occupation as Family Manager, rather than At Home Mother.